You are here: Home » News » Company News » What is the working principle of the automatic spraying machine?

What is the working principle of the automatic spraying machine?

The main working part of the fully automatic cement spraying machine is a double-acting pneumatic hydraulic booster pump, and the reversing mechanism is a special form of pilot fully air-controlled air distribution reversing device. After entering the compressed air, when the piston moves to the upper or lower end of the cylinder, the upper pilot valve or the lower pilot valve is actuated, and the air flow is controlled to instantly push the air distribution reversing device to reverse, so that the piston of the air motor makes stable and continuous reciprocating motion . Because the piston is rigidly connected to the plunger in the paint plunger pump, and the area of the piston is larger than that of the plunger. This pressurizes the sucked paint. The pressurized paint is transported to the airless spray gun through the high-pressure hose, and the hydraulic pressure is released at the airless nozzle, and sprayed onto the surface of the object to be coated after instantaneous atomization to form a coating layer. 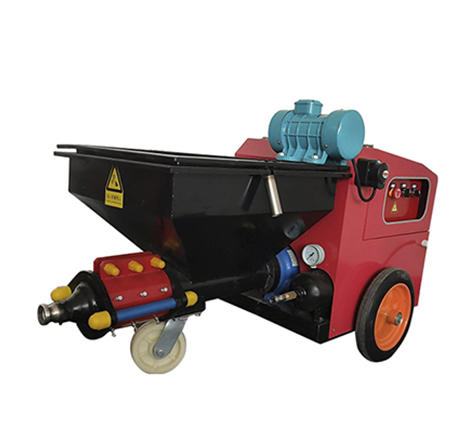 The pilot valve is an auxiliary valve used to manipulate the control mechanism of other valves or components. Its characteristics are as follows:

1) It forms a pilot control liquid bridge with a fixed liquid resistance, and controls the main valve or secondary valve or variable lever according to the input signal;

3) The input signal is relatively small;

4) It can accept a variety of input methods, such as manual, electric, hydraulic, pneumatic, mechanical cam, electric ratio, etc.;

5) In the case of variable pump control, a variety of pilot valves form a modular structure, making it easy to choose between multiple functions;